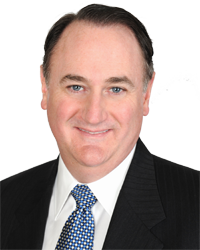 David R. Hardten, MD, FACS, is a founding member of Minnesota Eye Consultants as well as a renowned clinician, surgeon and thought-leader in the field of ophthalmology. As Minnesota Eye Consultant’s research director, Dr. Hardten is actively involved in numerous research projects that that deal with the latest refractive procedures for the correction of myopia, astigmatism and hyperopia as well as the treatment of other eye diseases. Dr. Hardten is also an adjunct associate professor of ophthalmology at the Illinois College of Optometry and adjunct professor of ophthalmology at the University of Minnesota.

The femtosecond laser is typically the same thickness from edge to edge, which may reduce the risk of ectasia. This is because with the femtosecond laser, the peripheral sections are not deeper than the center section of the flap as it was with most mechanical keratomes. Also, the predictability of the flap thickness is typically better. If you set the flap for 110 microns, it is likely within 15 microns of that thickness. Yet, with the creation of a thinner flap, the flap is more fragile. Additionally, with the fact that the laser adds bubble like energy into the interface, the flap interface is not 100% continuous. There are small bridges of tissue that must be separated before the flap is fully reflected.

Importance of the line/spot separation

The closer together the spacing of the laser spots for the lines and spots (i.e., line/spot separation), the easier the flap is to lift. Yet, a tighter line/spot separation also creates a longer flap creation time as well as higher energy placed into the flap. Both of these factors may lead to higher amounts of inflammation postoperatively. For each laser, the engineer can help with starting parameters for the spot/line separation based on how the laser cuts in the gels that are used for calibration.

If the flaps are too difficult to lift, then the spot/line separation can be tightened to create an easier flap lift. Despite this adjustability, it is always wise to lift the flap carefully and incrementally to reduce the risk of damage to the flap.

I’m right-handed, so the approach for a left-handed surgeon may be the mirror image. I’ll describe my typical approach to lifting the flap. My initial process in lifting the femtosecond flap is to start at the 8:00 position, and use the smaller end of the Seibel LASIK flap lifter and enter the flap gutter vertically. At the base of the flap, I then rotate the end of the small tip into the interface for about 1mm with the small end of the lifter. With the point parallel to the interface and in the interface, I follow the circular nature of the flap edge and pull back towards the right side of the hinge. You will encounter more tension at the right side of the hinge. I then reverse the direction to counter-clockwise, still staying in the gutter with the end about 1mm into the interface until I reach the counter-clockwise edge of the flap at the hinge.

You may encounter issues with the initial cleavage at the gutter if the applanation did not include the periphery of the flap. This can occur due to poor centration of the initial suction ring placement. The suction ring should be centered on the pupil, not the limbus, since it is easier to get a full flap centered on the pupil. Additionally, if there is excess fluid on the surface of the cornea during the flap creation, then the cornea can be pushed back away from the cone, and the side cut may not be complete. This can sometimes be foretold by not seeing the laser penetrate the glass at the end of the laser flap creation, or the appearance of small bubbles during the side cut creation. If there is only a partial side cut, it is sometimes possible to use the flap lifter to tear through 15-20 microns of tissue, but care should be taken if there is no side cut at all. In that situation, the laser could be re-applanated, and the side cut only feature can be used. If this is done, I usually shrink the zone of the flap by 0.2mm so that I can make sure to still be into the area where the lamellar flap is present. This should be done right away so that the suction ring is placed on the eye in the same location as it was with the initial flap creation.

Separating the flap from the stromal bed

After the side cut is opened, I then use the longer end of the LASIK flap lifter to finish separating the flap from the stromal bed. I usually start near the clockwise hinge region, and push the lifter in about 1/3 of the way into the interface, and sweep inferiorly separating the right 1/3 of the flap. At this point, you will be able to gain an appreciation for the stickiness of the flap. My next sweep starts about 2mm from the hinge area (leaving 2mm extra that is unlifted near the hinge), and separating another third of the flap to the inferior flap border. In situations where the flap is difficult to separate, I take a smaller amount than a third of the flap, and in situations where the flap is very easy to separate, I’ll at times take a larger amount of the tissue. In the typical case, I will then separate the left most third of the flap, still leaving a small amount of tissue near the hinge. In an attempt not to tear the hinge, I leave that section near the hinge for the final separation.

Damage to the flap is unusual. In cases where there is significant tearing of the flap in the ablation zone, it is typically laid back into position and allowed to heal. You can later determine whether surface PRK or removal of the flap would be required. Fortunately, these situations are rare with the femtosecond laser.

If you are interested in learning more about this topic or speaking with Dr. Hardten, please feel free to contact us at clincial@sightpathmedical.com