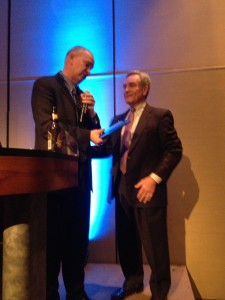 Sighpath Medical recently hosted a national Sales & Operations meeting in Las Vegas, Nevada. The 4-day event culminated in the Sightpath Medical Awards Dinner, where five employees were recognized for their contributions to the company, including Dick Minors.

Dick Minors was presented with the Lifetime Achievement Award
Dick Minors, at right, with Sightpath president and CEO, Jim Tiffany during the awards ceremony, began his career with Sightpath in 2001 and has since held a variety of upper-management positions within the Sightpath organization. He helped lead the sales team to record growth and territory expansion throughout his tenure and has played in role in the hiring or training of a large majority of the current Sightpath sales team. Dick has been integral in the success of Sightpath and in helping to create an inclusive company culture. He was presented the Lifetime Achievement Award in recognition of these contributions and for his hard work, loyalty and friendship over the years.

Congratulations to all of the winners, including Dick, on this honor and their outstanding accomplishments in 2012!

Sightpath Medical will be at the ASCRS Annual Meeting in Boston, MA, May 15 – 19, 2020. Here at Sightpath, we believe eye care providers deserve access to affordable, state-of-the-art technologies and highly qualified certified technologists regardless of location.

Ross is one of the many wonderful MoFe engineers at Sightpath Medical. What does he have to say about it?